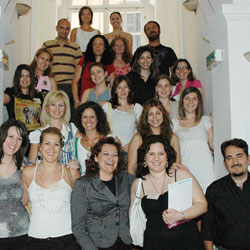 [ View all the photo galleries ]

The work of the Third International Seminar on Information Law was completed on June 26, 2010. Over thirty-five speakers from Greece and abroad (Brazil, Mexico, Italy, Russian Federation, USA, etc.) contributed to the program with their presentations. The two-day seminar was a joint initiative of the international scientists company INSEIT and the German Institute for Legal Informatics. Welcome and opening remarks were made by Professor John K. Karakostas, Vice-Chancellor of the University of Athens.

Keynote speaker for the first day of work (06/25) was President Commissioner Oscar Guerra Mauricio Ford, head of the Institute for Access to Public Information in Mexico. The President Commissioner was addressed by the Assistant Professor and Vice-Chairman of the Authority for the Protection of Privacy of Communications, Mr. Angelos Syrigos. President of the main session was Professor Dimitris Gritzalis. President Commissioner Ford reported the work of the Authority in Mexico for the period 2004-2009. During his presentation, a video was shown highlighting the Authority's work in Mexico. Following Mr. Ford, Mrs. Lilian Mitrou, Assistant Professor of the Aegean University, discussed the development of privacy and personal data in Europe. On the same day, June 25, the work of the seminar shifted its focus to issues of privacy and information access (Freedom of Expression and the Coroners' and Justice Act 2009, Regulating Speech on the Internet: Trends, Myths and Realities, Privacy in the Nook of Facebook, The Future of EU Working Parties’ “The Future of Privacy” and the Principle of Privacy by Design, Biometrics and the Protection of Privacy, The use of Genetic Data and Private Insurance, etc.).

Main speakers on the following day were Professor and Corresponding Member of the Academy of Athens Mr. Labros Kotsiris (The Moral Foundations of Intellectual Property) and Scenarios Analyst of the European Patent Office Mr. Konstantinos Karachalios (From Latency to Patency: How to Make the Patent System Deliver its Original Promise). Day Two of the seminar was dedicated to intellectual property (Open Access Repositories and Freedom of Information, User-Created Content and Copyright: Two Worlds Collide?, Digitization of Works and Access to Culture: Recent Developments in Google books and Europeana, etc. ). The seminar ended with the Young Scholars' Forum, where postgraduate students of the Department of Archives and Library Sciences and other departments presented their work and had a chance to exchange ideas with foreign researchers.

Content not available
No results found for that day

The secretariat is open:
Monday-Friday: 9am to 3pm
Saturday & Sunday: Closed

© 2021
This website is using cookies to collect information about the usage of the website in an effort to meet the needs of the visitors and to improve its content.More